Are all these articles on weight loss and lower glucose levels from drinking tequila correct? 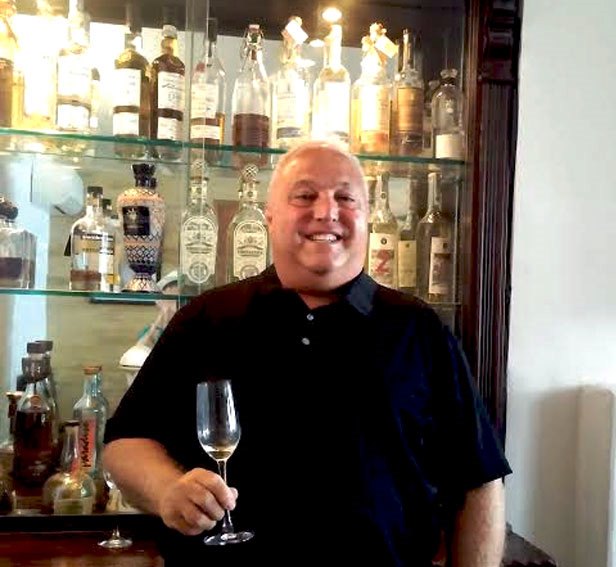 A lot of the info from the plethora of articles in the last 3 years is misleading. Most say that the sugars found in the plant that makes tequila could lower blood glucose levels for people with type 2 diabetes, and help obese people lose weight. Sounds great right? The plant does contains natural sugars known as agavins, a natural form of sugar found in the agave plant which are non-digestible, and can act as a dietary fiber, not raising blood glucose for people with type 2 diabetes. Agavins could also help lower your blood pressure and like other fructans, (made of the sugar fructose) are the best sugars to help support growth of healthful microbes in the mouth and intestines, and I am sure it has helped my own IBS. Agavins are a natural form of the sugar 'fructose', called a fructan, and although there has been criticism of high-fructose corn syrup lately, which can actually 'raise' blood sugar levels, there is a big difference here. Although agavins are fructans, which are fructoses linked together in a long branched chain, the human body can’t use them in that configuration, so they 'don't' affect blood sugar, according to Mercedes G. López, Ph.D. who reported to a meeting of the American Chemical Society's 247th National Meeting in Dallas. People often confuse agavins with agave nectar or agave syrup, which appear on many health-food store shelves, but unfortunately these products contain fructans that HAVE been broken down into individual fructoses, so they are much more similar to high-fructose corn syrup, which is not a good thing. Study do show that agavins are still better than using artificial sweeteners, which are absorbed by the body and can cause side effects, like headaches. Keep in mind that agavins are not quite as sweet as their artificial counterparts.

After consulting an expert, who makes tequila, people need to understand that ONLY un-fermented agavins from the agave plant used to make tequila, are effective in helping to lower blood sugar and can possibly lower triglycerides in the blood and levels of cholesterol. Agavins are the carbohydrate used to make tequila, but because they are converted into ethanol (alcohol) in the fermentation process, they are not found in the finished product. All ethanol in tequila comes from the fermentation of glucose and fructose, generated after agave pinas are cooked. Agavins, the sugar substance in agave are ONLY effective when raw or cooked but NOT FERMENTED and DISTILLED. Studies found that agavins reduce glucose levels and increase GLP-1 in mice, which also increases the amount of insulin The study showed that most mice that drank agavins, ate less, lost weight and their blood glucose levels decreased when compared to other sweeteners such glucose, fructose, sucrose, agave syrup and aspartame. GLP-1 is the key ingredient that causes you to feel full much longer, as it slows the emptying process in your belly. Most people can tolerate agavins, but some get stomach pain. I've read that agavins itself are not expensive, but it's a moot point, if you're drinking tequila. A study done in 2014 was the first attempt to evaluate agavins as sweeteners, in spite of their lower sweetness compared to sugar. The American Chemical Society, Mayo Clinic and others, say that they still have to do more research on the sugar, so it will not be in stores as a dietary supplement just yet. Once they are able to extract these properties and distribute them for mass consumption, then this miracle-like drug could become a reality. This could be a real big thing, and a major breakthrough.

Simply stated, in the process of making tequila, the sugars (agavins) are converted to alcohol in fermentation, followed by distillation so.... NO MORE AGAVINS. So in the act of making tequila, we lose the agavins (everyone seems to leave that part out)....Sorry.

So all these articles with headlines saying "study shows that drinking tequila could help you lose weight” or "tequila could lower blood glucose levels", or "drinking tequila could prevent osteoporosis" will continue, but they forget to mention that any health benefits of agavins in humans, (which by the way have never been proven) are unrelated to drinking actual tequila. Although it could be true that agavins, the sugar found in the agave plant, 'may' lower blood sugar in humans, it is NOT present in finished tequila. Research shows that drinking tequila in moderation, like wine for the heart, could still lead to lower blood pressure, and may aid those suffering with obesity, but this is more to do with the alcohol, than the agave. Studies also show that a shot of tequila before a meal increases appetite and a shot after a large meal aids in digestion, as well as keeps you feeling full longer. This is because the sugars tell the gut hormones that the stomach is full sooner and keeps the food in the stomach for longer. So drinking tequila may aid those who consume in moderation, to lose weight because it tells the brain to stop eating sooner and keeps the stomach feeling full for longer, thus causing weight loss, which can help lower blood pressure.

Yes I believe Tequila is the best drink, and the healthier choice in spirits (low sugar,low calories, no carbs, etc) and I myself, absolutely LOVE Tequila, BUT DON'T BELIEVE everything you read. Anything that promotes tequila is fine by me, but let's just get it right.