What is Blue Weber Agave? 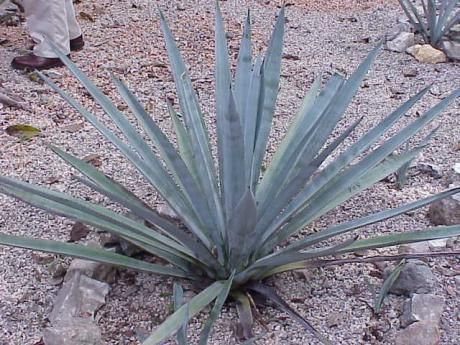 'Blue Agave' is the common name given to the cultivated species of the agave plant- "Agave Tequilana Weber variety Azul". This is the agave plant we all know of, that must be used to make our beloved spirit 'Tequila'. Blue Weber Agave is the ONLY agave legally allowed to be used in the production of Tequila. It is named after botanist Frédéric Albert Constantin Weber. Some history records indicate that Franz Weber may actually have been the assistant to the actual German botanist, but regardless, he was credited with deciding that this was the best agave plant to use for tequila production. Around 1902, the blue agave was renamed, to the Agave Tequilana Weber Azul, to honor the German naturalist, who was classifying Mexican flora since 1896. By law of the Mexican government, the 'Norma' is the official Mexican Standard, and these are a series of official, compulsory standards and regulations for diverse activities in Mexico. The Norma Oficial Mexicana applies to all processes and activities related to the supply of agave, production, bottling, marketing, information, and business practices linked to the distilled alcoholic beverage known as Tequila. It states that 'Tequila' MUST be produced using agave of the species Tequilana Weber Blue variety and grown in the federal states and municipalities indicated in the Declaration. NOM-006-SCFI-2012 says ONLY this species may be used in the production of tequila and ONLY from the state of Jalisco and limited parts of 4 other surrounding states. These include parts of the States of Michoacán, Nayarit, Guanajuato, and Tamaulipas.

Keep in mind that although the plant is the same plant, Blue Weber Agave plants nurtured in the Los Altos or highlands area, which has mostly red clay soil and higher elevations, produce a tequila that's different than those grown in the rich, darker volcanic earth of the Valle or lowlands. The Valle (lowlands) terroir produces more of a masculine profile, more forward in flavor with an earthy, peppery and herbal taste profile. The Los Altos region (highlands) terroir produces more feminine, softer, rounder, more fruity and floral agaves. The terroir matters greatly, on how the Blue Weber agave plant may taste later, along with many other factors of course. See my article on Tequila regions- HERE- GHOST_URL/tequila-regions/#.WNz2NW8rLAU

This variety of agave was picked due to it's high production of sugars, mostly fructose, in the core of the plant. It took the shortest amount of time to mature, had the highest carbohydrate content, and usually has the largest amount of pups for replanting. Rumor has it, that taste was never a factor. These attributes make it suitable for the preparation of alcoholic beverages. It is also known that
the plant is very fragile and susceptible to fungus and is very difficult to cultivate as it is attractive to weevils, fungi, bacteria and cold snaps (freezes). The plant takes 6-10 years to reach maturity, so a single crop loss could set a grower back a decade. Pesticides are used on the plants ....but today pesticide free management systems are used and include pheromone-baited traps for the agave weevil and the use of beneficial insects to reduce fungal infections.


Blue Weber is one of 136 species native to Mexico, and the wild version of this succulent thrives in Jalisco, where it is nourished by volcanic soils and can be pollinated by long-nosed bats. Yes BATS... TO LEARN MORE ABOUT BATS POLLINATING BLUE WEBER AGAVE- SEE-GHOST_URL/the-history-behind-tequila-and-bats/#.Vh0T6lJ0y9I. A mature plant can grow to be 5 to 8 feet tall, and 7 to 12 feet wide. Like most agaves, it has a large rosette of thick fleshy leaves, lined with teeth, and ending in a sharp point. The leaves that are about 4” wide and are blue-grey to blue-silver in color. The tequila agave is native to Jalisco, Mexico, and although it grows in other regions, the plant grows well in the black volcanic soil of the Lowlands (El Valle) and the Red soil of the Highlands(Los Altos). It is a cool tropical plant, and can tolerate only brief amounts of light frost before being severely damaged by cold. Blue agaves grown in the highlands Los Altos region are larger in size and sweeter in aroma and taste. Agaves harvested in the lowlands, on the other hand, have a more herbaceous fragrance and flavor.

Blue Weber agave is part of the Lily family- NOT a cactus. The plant favors altitudes of more than 1,500 metres (5,000 ft) and grows in rich and sandy soils. Female Blue agaves sprout a stalk (quiote) when about five years old that can grow an additional 5 metres (16 ft), and they are topped with yellow flowers. These 'stalks' resemble asparagus. Blue Agave is the common name given to the cultivated species of agave (Agave tequilana Weber variety Azul) used in the production of tequila and blue agave nectar. Male agaves do not sprout a stalk (quiote) but instead have a cogollo, a dense circle of leaves where the quiote would have been. Most quality producers make sure to cut out the cogollo when harvesting or before baking the agave, as this negatively impacts the flavor of tequila, and it can make the tequila bitter.

The central core of the blue agave plant, known as a piña (because the swollen stem of the plant resembles a pineapple once the leaves are removed), is juiced (cooked) to get the liquid, that will be filtered (for nectar) or fermented (for tequila). The blue agave is commercially harvested not usually longer than 12 years, when the heart of the plant reaches about 80 lbs (in the highlands, plants can produce piñas weighing hundreds of pounds). A 100 lb core will eventually produce about 6 liters of tequila.

Blue agave can reproduce sexually or non-sexually, via runners. In order to increase their harvest, farmers don't let the plants reach sexual maturity, so they cut their stalk (quiote), thus stopping the bats from pollinating the stalk seeds. Once a plant produces an inflorescence (quiote), the stalk is severed- OUCH!!! so that the plant now puts it's energy into swelling the piña, not producing flowers and seeds (sorry bats). Farmers sever the runners ("hijuelos") for new plantings, but as these cuttings are genetically identical to the mother plant, the tequila industry relies on a genetic monoculture, vulnerable to fungus and disease.

There are issues that arise in using Hijuelos (baby shoot or pup from the mother plant). The procedure of letting bats carry the seeds they feed on, to other plants (pollinating) is not used today, but there is talk of allowing a small percentage of fields to bring back this technique. SEE- http://longislandloutequila.com/the-history-behind-tequila-and-bats/#.Vh0T6lJ0y9I.

SEE OTHER GREAT EDUCATIONAL ARTICLES and HONEST TEQUILA REVIEWS along with REAL TOP TEQUILA LISTS- HERE ON- LONG ISLAND LOU TEQUILA - SEE all the tabs above, and PLEASE LIKE on Facebook- https://www.facebook.com/Long-Island-Lou-Tequila-641682619241422